Look who rolled up to my show tonight to say hi!! @champagnepapi #lovehim #jlovegas #ALLIHAVE

Fans are thrilled with Drake’s new playlist More Life, which made its anticipated debut on Saturday.

And while he embraced new sounds like Grime and dance music, the rapper also found time to vent over a recent relationship gone sour. With whom you ask? None other than actress/singer Jennifer Lopez.

The track “Teenage Fever,” which borrows the chorus of Lopez’s 1999 hit “If You Had My Love,” finds him reflecting on their brief tryst in typical Drake fashion. “Your heart is hard to carry after dark,” he raps, “You’re to blame for what we could have been/cause look at what we are.” Given that Lopez has recently started a relationship with MLB star Alex Rodriguez, this might be hinting at the fact that Drake feels she is at fault for things falling apart.

Whoever’s to blame, its clear that breakup is still fresh on Drake’s mind. Even the title, “Teenage Fever,” carries a double-meaning, as it refers to the eager feelings he initially had in the relationship and the fact that Lopez was actually his teenage crush. It’s a difficult situation to navigate, but if anyone can rap about complex heartbreak, its definitely Drizzy.

Listen to the song and the rest of More Life below. 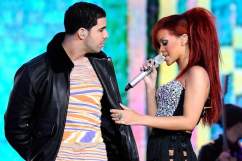