In the third day of the preliminary hearing for Aurora theater shooter James Holmes, prosecutors aired photos pulled from Holmes’ iPhone that allegedly show he cased the theater — showing possible premeditation of the massacre that killed 12 and injured 58 more.

The photos also include insane self-portraits that are all the more freakish when conveyed through artist’s drawings made during the court proceedings.

In one, he maniacally sticks out his tongue. In another, he poses with a Glock pistol.

Holmes’ phone included a photo of an exit door at the theater. Investigators believe he propped open such a door to make his entrance into the theater.

Another photos shows an array of powerful weapons arranged on a bed.

Earlier this week, prosecutors provided details of the arsenal Holmes amassed and the elaborate booby traps he set at his apartment. 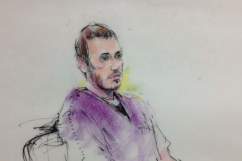