Long before there were $5 footlongs, there was Jared. He was a humongous monster who lost a sh*t-ton of weight by eating at Subway and Subway alone. Now Subway is that haven for fast-food addicts looking for a way healthier way to consume medium-grade slop.

But Subway is in hot water now as two men from New Jersey are suing the chain for shorting them on their footlongs. The nerve!

The pair filed their suit on Tuesday, seeking “compensatory damages from the company and a change in practices,” according to the New York Post.

Stephen DeNittis, the lawyer representing John Farley of Evesham and Charles Noah Pendrack of Ocean City, claims he measured sandwiches from 17 area Subway shops and not a single one measured 12 inches. He says the company needs to either make their sandwiches actual footlongs, or stop advertising them as such. Fightin’ words! 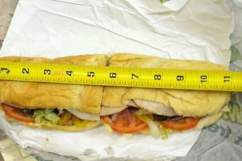 This issue first blew up when someone posted the photo of a sub and a ruler to Subway’s Facebook page and it went viral. The Post did its own investigating in NYC Subways and found that four out of seven subs were 11 or 11.5 inches. Franchise owners also say that the corporation has also been cutting corners, upping the prices of food and providing less food to their stores.

Some say toasted subs come out shorter, which makes sense, right? Ever heard of Shrinky Dinks?

Subway spokesman Les Winogad simply responded that the original photo “doesn’t meet our standards.” That should hold up in court.