The greatest swimmer in history has set his sights on dry land.

Michael Phelps, legendary gold medal swimmer, has signed a sponsorship deal with Ping, signaling a drastic career move from the pool to the links.

According to PGA, Ping made the announcement Wednesday on the company’s partnership with Phelps, who is pairing up with golfer Bubba Watson.

Phelps told USA Today he’s psyched to play with the golf legend: “It is going to be cool to be able to go play with Bubba. I don’t know if I can compare it to anything, but walking up to the 16th is going to be a little crazy. I’m going to go out there and have fun and enjoy myself, and as long as I do that, I think that’s really all that matters.” 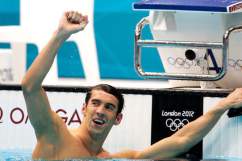 Phelps isn’t the first non-golfer to sign an endorsement deal with a golf company. Pop singer Justin Timberlake recently signed with Callaway Golf to help the company reach a new generation of golfers.

Phelps has also signed with the Golf Channel for the new reality show “The Haney Project.”

Phelps is just the latest high-profile athlete to attempt a transition between sports. Michael Jordan infamously tried his hand as a Minor League outfielder for Chicago White Sox after his first retirement from the NBA. And WWE wrestler Brock Lesnar pursued an MMA career after leaving the wrestling circuit.