With all the subway deaths that have been happening lately, it’s nice to hear about one that was actually avoided.

Christopher Knafelc is being hailed as a hero after jumping to rescue a 63-year-old man who fell on the train tracks of a North Philadelphia subway station, reports Philly.com.

Knafelc was waiting for his train on a bench at the Cecil B. Moore station when he saw the man go down. Without out hesitation, the 32-year-old hero sprang into action and jumped down to the tracks to save him, knowing that a train would be arriving in just a few minutes. Knafelc was the only person that tried to help.

“I can’t imagine not helping someone in that situation,” Knafelc said.

Train traffic was halted while the Philly hero held the man’s head and neck stable. Firefighters arrived and the victim was taken to a hospital where he is listed as in stable condition. 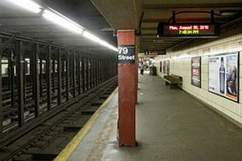 Teen Hit and Killed by Subway Train in Manhattan

Loading more stories
wpDiscuz
0
0
Would love your thoughts, please comment.x
()
x
| Reply
With all the subway deaths that have been happening lately, it's nice to hear about one that was actually avoided.