Former President of Venezuela Hugo Chavez, who died on Tuesday after a battle with cancer, will be embalmed and put on display in a glass casket for eternity at a military museum, reports The Guardian.

“It has been decided that the body of the comandante will be embalmed so that it remains eternally on view for the people at the museum,” Nicolás Maduro, the country’s acting president, said.

A state funeral will be held for the late president on Friday in Caracas, where over 30 world leaders, mostly from Latin America and the Caribbean, will attend. More than two million mourners have already paid their respects to Chavez, whose body is currently at the museum and will remain for “at least seven more days.” The museum will eventually become his permanent home.

“We have decided to prepare the body of our ‘Comandante President,’ to embalm it so that it remains open for all time for the people. Just like Ho Chi Minh. Just like Lenin. Just like Mao Zedong,” Maduro said.

The funeral ceremony for the president will begin at 11 a.m. local time in the capital of Caracas on Friday. 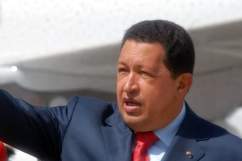 Hugo Chavez Has Died: Top 10 Facts You Need to Know

Loading more stories
wpDiscuz
0
0
Would love your thoughts, please comment.x
()
x
| Reply
Late Venezuelan President Chavez will join a select few other world leaders and be embalmed and put on display for eternity.