North Dakota Governor Jack Dalrymple has just signed all of the abortion laws that were passed by the state’s legislature into law, reports KFYR-TV.

One bill forbids doctors from performing abortions after detection of a fetal heartbeat, which usually can be heard at six weeks. The other makes it illegal for doctors to do abortions based on a genetic defect, such as down syndrome. 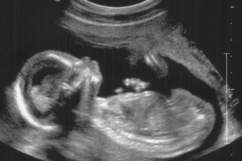 Doctors not patients are subject to punishment under the law. Physicians would face fines and up to five years in prison if found to have broken the new laws. But Gov. Dalrymple has admitted it remains to be seen how the law will stand up in court, he told the state’s legislature after signing the bills:

I have signed HB 1305 which would ban abortions performed solely for the purpose of gender selection and genetic abnormalities.

I have signed HB 1456 which would ban abortions after the detection of a fetal heartbeat. Although the likelihood of this measure surviving a court challenge remains in question, this bill is nevertheless a legitimate attempt by a state legislature to discover the boundaries of Roe v. Wade. Because the U.S. Supreme Court has allowed state restrictions on the performing of abortions and because the Supreme Court has never considered this precise restriction in HB 1456, the constitutionality of this measure is an open question. The Legislative Assembly before it adjourns should appropriate dollars for a litigation fund available to the Attorney General.

I have signed SB 2305 which requires admitting and staff privileges at a nearby hospital for any physician who performs abortions in North Dakota. The added requirement that the hospital privileges must include allowing abortions to take place in their facility greatly increases the chances that this measure will face a court challenge. Nevertheless, it is a legitimate and new question for the courts regarding a precise restriction on doctors who perform abortions.

In early March, Arkansas passed what was then the most restrictive abortion laws in the country, which banned the procedure after 12 weeks of pregnancy. The bill made it into law despite the objection of Governor. Mike Beebe who called the law “unconstitutional.”

Loading more stories
wpDiscuz
0
0
Would love your thoughts, please comment.x
()
x
| Reply
Governor Jack Dalrymple signed the two bills into law giving his state the most restrictive abortion laws in the US.