A video sent in to WMDT 47 News caught the brilliant, possible meteor that was reported on social media sites by hundreds of people across the East Coast on Friday night. The meteor was caught by a surveillance video at Hopkins Automotive in Salisbury, Maryland. 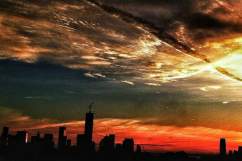 Meteor Spotted on East Coast: 20 Tweets from People Who Saw It

The sightings started shortly before 8 p.m. and by 10:30 p.m., the American Meteor Society said it received 353 reports of the meteor.

Donald Yeomans, manager of NASA’s Near-Earth Object Program in Pasadena, California, said that the sighting is consistent with a meteor shower. Yeomans also said that while meteor showers are not that rare, it is rare for so many people to see it and that the meteors don’t typically reach the ground.