A trailer smashed into a petroleum tanker (like the one above) and caused an explosion that killed at least 60 people in Nigeria.

A road accident in southern Nigeria on Friday left at least 60 people dead. Here’s what you need to know.

1. It Happened in Nigeria’s Edo State


The accident happened in southern Nigeria in the Edo State around 1 p.m. on Friday along the Benin-Sagamu-Lagos expressway, reports the Nigerian Guardian News.

2. A Tanker Exploded
It is reported that a trailer with a burst tire smashed into a stationary petrol tanker and a luxury bus. The accident led to an explosion and a fire that involved additional vehicles.

“The fire spread to a mechanic workshop in the area and more than eight more vehicles undergoing repairs were burnt,” a source told African News.

3. At Least 60 People Were Killed
At least 60 people were killed in the accident. Most of the victims, who burned to death, were said to be aboard the bus. Four of the victims were in the tanker, as well as two children who were at a nearby mechanic workshop.

4. It Comes Two Days After a Bus Collision Killed 18 People in Nigeria
At least 18 people died on Wednesday when two buses collided on the Abuja-Lokoja Highway. One of the buses lost control and hit the other bus head-on as it was coming in the opposite direction. Nine others sustained serious injures.

5. Nigeria Has One of the Worst Road Accident Records
According to the World Health Organization, Nigeria’s has one of the highest traffic fatality rates among other countries. Potholes and poor paving contribute to its accident records, as well as aggressive drivers in Nigeria. 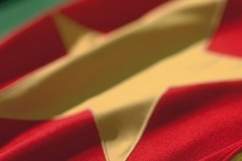 French Family of 7 Kidnapped: Top 10 Facts You Need to Know

Read More
5 Fast Facts, accident, Africa, Car Crash, Nigeria
It is reported that a trailer with a burst tire smashed into a stationary petrol tanker and a luxury bus.