Boston bombing suspect Tamerlan Tsarnaev compiled an Amazon wishlist of items that point to his interest in the realm of illegal activity.

One of Slate’s sources, Justin Hart, confirmed the existence of this wishlist. Some of the more interesting items on display are the following books, which touch on elements of fake identification, organized crime, war and terrorism:

Secrets Of A Back Alley ID Man: Fake Id Construction Techniques Of The Underground by Charrett Charrett.

Organized Crime: AN INSIDE GUIDE TO THE WORLD’S MOST SUCCESSFUL INDUSTRY by Paul Lunde and James Morton.

The Lone Wolf And the Bear: Three Centuries of Chechen Defiance of Russian Rule by Moshe Gammer.

Five Families: The Rise, Decline, and Resurgence of America’s Most Powerful Mafia Empires by Selwyn Raab.

Blood and Honor: Inside the Scarfo Mob, the Mafia’s Most Violent Family by George Anastasia.

For more insight into Tamerlan Tsarnaev and his ideals, take a peek at his YouTube channel. 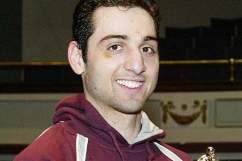