Daddy Yankee, the Puerto Rican rapper behind 2004 smash hit Gasolina, is apparently fighting rumors that he has come out as gay.

Mexico City’s Vanguardia has a quote from Daddy Yankee (which ran with the above photo) that supposedly reveals his homosexuality:

According to this information, the 36-year-old Puerto Rican singer, famous for his hit Gasolina, during a press conference supposedly made bare his sexual orientation by stating that “I do not lie, I do not lie out of fear. I’m a human being like anyone with strengths and weaknesses, and I think this is not a defect.”

But Buzzfeed tweeted a link to a story that includes Yankee’s (sort of) denial of what he calls an Internet rumor:

Below is a video of Daddy Yankee in February talking about gay rights and gay marriage. He says, in part (translation via redalertlive.com):

“I have people on my team who are gay, and I respect them entirely and give them work.” Now on the question regarding gay marriage he said “I believe that is a major decision not of Daddy Yankee but that of the government and the church for them to take great measures regarding human rights.”

Interestingly, Daddy Yankee gave his presidential endorsement to John McCain, who does not support federal endorsement of gay marriage but says the issue should be decided state-to-state.

Yankee has been the victim of Internet rumors before. In 2011, it was reported that Daddy Yankee had died in a car crash.

But for a guy who hasn’t had an album out in five years, and whose latest appearance was on an episode of that television atrocity Bad Girls Club, we have to hand it to Daddy Yankee for staying in the news. 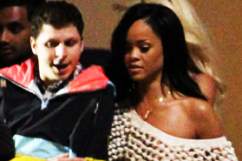