Justin Bieber’s troubles continue and this time its going down overseas in Sweden.

Police reportedly detected a strong scent of marijuana coming from Bieber’s tour bus while they tried to contain the mass crowd of fans gathering outside the singer’s hotel. Once the Swedish cops boarded the bus, they discovered a “small amount” of pot and a stun gun without a legal permit. No arrests have been made just yet and Bieber’s location during the pot bust has not yet been reported.

During the madness outside Bieber’s hotel, he tweeted out this pic of the unfolding scene:

lots of beliebers outside Justin’s hotel in Finland! twitter.com/BelieveTourUPD…

TMZ spoke with a representative from Stockholm PD, who gave them the complete details on this story:

Around 7:10 PM on Wednesday night, an officer smelled weed coming from Justin’s bus, which was parked in front of the Grand Hotel. Cops say … when the bus left the hotel and headed toward the Globe Arena, the officer contacted a special narcotics unit, which issued a warrant to search Bieber’s bus. We’re told cops searched the bus in the parking garage of the Globe Arena — no one was on the bus at the time. Cops say they found a small amount of narcotics (they won’t say which drug, but local papers say it’s weed) — along with a taser. We’re told cops have not identified a suspect yet … and the bus has not been impounded. Bieber had been seen with his pal Lil Za in the hours before the weed incident … and FYI, Za is the guy who was seen smoking pot with Bieber at an L.A. home earlier this year.

Bieber even sent out this cryptic tweet that may have alluded to this recent bust:

some of the rumors about me….where do people even get this stuff. whatever…back to the music

Fill Werrell chose to offer his hilarious opinion on Bieber’s past weed troubles with this telling tweet: 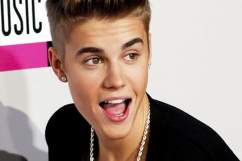 Justin Bieber Hopes Anne Frank Would Have Been a ‘Belieber’