A copy of a search warrant obtained by the Houston Chronicle shows that Dylan Quick, the 20-year-old student accused of stabbing 14 people at Lone Star College, told police he often fantasized about cannibalism, necrophilia and was obsessed with serial killers.

A normal day on the Texas college campus turned to chaos on Tuesday when Quick went on a rampage, wildly stabbing random students in the face and neck with a razor blade. The episode was so violent that pieces of the suspect’s weapon was found lodged in at least one victim. Two students were critically injured, but all survived. Quick was tackled by students who heroically leaped into action and was taken into custody by police. He is charged with three counts of aggravated assault.

Quick reportedly told investigators that he had been planning the attack for quite some time and that he had fantasized about killing people since he was in elementary school. As new developments in the story emerge, the details of his fantasies get even more gruesome.

Authorities searched the home of the suspect and found several books about serial killers and a Hannibal Lecter mask, modeled after the one the fictional cannibal famously wore in the movie. Quick reportedly had his own fantasies about cutting off people’s faces and wearing them as masks.

If Quick is convicted of a first-degree felony, he faces life in prison, but attorney Jules Laird wants the suspect to be examined by mental health professionals before moving forward. Currently Quick is being held without bail. 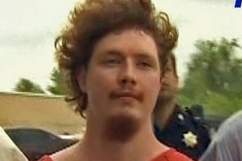 Loading more stories
wpDiscuz
0
0
Would love your thoughts, please comment.x
()
x
| Reply
As new developments in the story emerge, the details of the Lone Star slasher's fantasies get even more gruesome.