Margaret Thatcher’s funeral service on Thursday at London’s St. Paul’s Cathedral will attract an audience of around 2,000 politicians, dignitaries and celebrities.

All the current members of the British government are invited, as are all living US Presidents. 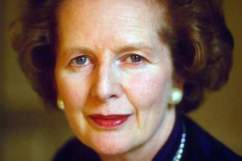 Here’s what you need to know about the most important attendees:

The Queen and Prince Philip

Queen Elizabeth II was born in the same year as Margaret Thatcher. Part of the duties of the Prime Minister is to meet with the Queen on a regular basis to discuss government policies. It was assumed that Thatcher and the queen would get along famously, but many reports suggest their relationship was quite frosty.

In her later years Thatcher however maintained that her and the Queen had a very amicable relationship and any discontent was stirred up by the press.

The former Secretary of State and First Lady, Clinton is known admirer of Thatcher. It was said that Clinton’s failed 2008 presidential bid adopted very similar themes to Thatcher’s numerous successful electoral campaigns. Clinton’s head-strategist, Mark Penn, wrote this in 2006 about their campaign:

We are more Thatcher than anyone else – top of the university, a high achiever throughout life, a lawyer who could absorb and analyse problems…

Thatcher’s successor as Prime Minister in 1990, he was the first-choice of the Iron Lady as the next PM, as she would do anything to resist the challenge of her Conservative foe Michael Hesseltine. Major was at the helm when the Conservative party lost their first general election in 18 years to Tony Blair’s New Labor in 1997.

The former British Prime Minister and someone who adopted many of Thatcher’s economic policies despite supposed different ideologies. Thatcher was famously complimentary of Blair, which was shocking since she rarely had anything nice to say about politicians from the other side of the bench.

Margaret Thatcher, Pope John Paul and Ronald Reagan changed history. The world would be a much different place without them.

Gingrich has previously been criticized for comparing himself to Thatcher.

The former Dynasty star has said that her character in the show, Alexis Colby, was based on the Iron Lady.

One of the more unusual names to appear on the list, the presenter of BBC’s mega-hit motor show Top Gear will attend. Other than the fact Clarkson, judging by his anti-PC stance on most issues, probably votes Conservative, it’s difficult to understand the invite. He joked about the invite on Twitter:

Many questions about why Im going to the Maggon’s funeral. She was a massive Top Gear fan. Her favourite car was the Mercedes SLS.

The multi-multi-award-winning musical lyricist was a noted supporter of Thatcher during the 1980s. Rice helped to create the Broadway hits: The Lion King, Evita, and Jesus Christ Superstar to name but a few. Rice maintains the invite despite his own comments about the Conservative party these days, The Guardian reported in 2007:

Sir Tim Rice, the hit lyricist who has been a Tory party conference fundraiser and donor, said today that he was now “unloved” by the Conservatives.

He claimed that they were no longer interested in him or his “Neanderthal views”.

Writing in the Spectator magazine, Sir Tim said: “It has finally dawned on me that my relationship with the Conservative party has irrevocably changed.

The famed thriller novelist, who produced such bestsellers as The Day of the Jackal and The Odessa File, has been an outspoken supporter of the Conservative party throughout all of his public life.

A Representative of Nelson Mandela

It’s unclear just who that representative will be, but Mandela himself was invited but cannot attend due to health problems. The invite comes in spite Thatcher’s support for the Apartheid regime that kept Mandela in prison for 30 years. Thatcher said of Mandela and the African National Congress in 1987:

One of Thatcher’s supporters in government, Terry Dicks, said of Mandela, when the former South African president refused a request to meet Thatcher after his release from prison:

How much longer will the Prime Minister allow herself to be kicked in the face by this black terrorist?

Mandela and Thatcher did eventually meet at government buildings in late 1990.

Reportedly former First Lady Nancy Reagan is “heartbroken” that she cannot attend the funeral due to her own poor health.

Thatcher’s old sparring partner Neil Kinnock also cannot attend due to another funeral he has to be at in Wales.