The United States positioned a destroyer ship capable of shooting down missiles off the Korean peninsula in response to rising tensions with North Korea, reports The Raw Story.

The destroyer ship is capable of intercepting and destroying a missile, should North Korea decide to shoot one off since the hostile state has threatened to launch missile strikes against the U.S. mainland. Although experts say that North Korea doesn’t even have the firepower to launch the type of attacks they threaten, the deployment is a precautionary measure.

North Korea announced on Friday that it has officially entered a state of war with South Korea and even targeted the U.S. in a statement from the Korean Central News Agency. Still, U.S. defense officials insist that there is nothing to indicate that the country is on the verge of a missile attack.

“I would note that despite the harsh rhetoric we are hearing from Pyongyang, we are not seeing changes to the North Korean military posture, such as large-scale mobilizations and positioning of forces,” White House spokesman Jay Carney said. 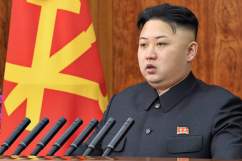