NOTE: Heavy.com is on the ground in Venezuela, bringing you exclusive coverage of the historic election to replace the deceased Hugo Chavez.

CARACAS, Venezuela — Venezuela faces a historic decision today. People are heading to the polls to elect a new leader who will take the place of the deceased and controversial Hugo Chavez. The electoral fight is between the opposition’s center-left candidate Henrique Capriles Radonski and Hugo Chavez‘s extreme-left successor Nicolas Maduro. There is hope of high voter participation rate.

As people continue to flow to voting centers, there has been evidence of some foul play on the government’s side.

During last October’s presidential election between Hugo Chavez and Henrique Capriles, most opposition supporters voted early in the morning. But voting has been comparatively light this morning, as people have been strategically instructed to spread out their vote throughout the day. Using the information collected from the required electronic fingerprinting of voters, the government is believed to be able to gain real-time information about who has yet to vote.

Volunteers from the youth movement, on election day in Caracas. (Photo by Joanna Hausman/Heavy.com)

The government then uses this information to guide its “Operacion Remolque” — a targeted “turn-out-the-vote campaign” reminding voters of the specific government benefits they have received, and which could potentially be taken away from them. In this campaign, the government uses the national guard, militia and the assets of government and state owned enterprises. By delaying the vote, the opposition hopes to disrupt the effectiveness of the government’s informational advantage.

Also, state owned television channels have been used to mobilize voter participation for Maduro. This is considered illegal.

Reporte Confidencial, an online news source, has reported on this “operacion remolque.”

A viral video that surfaced early in the day from the state of Zulia showed a government-sponsored electoral volunteer, following voters to the booth and “helping them vote.” The man dressed in the “Bolivarian” red shirt would look on as the person voted and then texted from his phone after each voter. This is a violation of the law that clearly states that an individual’s vote is secret. Watch the video below:

Rumors of the use of tear gas in specific voting stations have also been circulating although it has not been confirmed.

At least four people in Caracas have been detained after it was the discovered that each carried 40 fake I.D’s with attempts use them to forge votes pro-Maduro.

The current vice president of Venezuela (husband of Hugo Chavez’s daughter) has gone on national television to say: “We must honor the decrees of commander Hugo Chavez.”

2 p.m. was believed to be the time at which most people would head to their respective voting stations, and recent exit polls reveal Capriles is about 4 percent behind. If Maduro wins by less than 5 percent, there is likely to be a call for a recount. This could spark some disagreement and perhaps citizen upheaval on both sides.

Others think that Capriles is sure to win, but that the government will not accept defeat.

Electoral stations will close at 6 p.m. Some believe Maduro is ahead but a reliable source has said that as of now, numbers look towards Capriles’ favor: 53.1 percent for the opposition and 46.9 percent for Maduro. The opposition candidate posted the following tweet at 5 p.m: Something good is happening !!! Everyone go and vote, the voting stations will close in 1 hour! 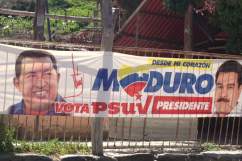 Loading more stories
wpDiscuz
0
0
Would love your thoughts, please comment.x
()
x
| Reply
Get an inside scoop as Heavy.com reports on what is happening on the tense grounds of Caracas.