NOTE: Heavy.com is reporting from the ground in Venezuela ahead of the April 14 elections to replace longtime leader Hugo Chavez, who died last month. Stay tuned for daily updates from correspondent Joanna Hausmann.

Watch a video telling the story in this article below.

CARACAS, Venezuela — The eerie silence that once blanketed the Venezuelan capital of Caracas after the death of its 14-year controversial leader, Hugo Chavez, is no longer heard.

On Sunday, the political opposition which has actively protested Hugo Chavez’s divisive and extreme reforms for years, saw its biggest political demonstration since 1999. Hundreds of thousands of people took to the overflowing streets to support Henrique Capriles Radonski, the opposition leader who hopes to beat Hugo Chavez’s successor Nicolas Maduro in the presidential elections set to take place this Sunday, April 14.

Coming from six different starting points in the city, the streets didn’t seem big enough to hold the thousands who proudly held up their Venezuelan flags and emphatic posters. Heavy.com was able to step into the sea of people and get an insider’s perspective on this tumultuous political situation that ravages the tropical country of Venezuela.

The opposition party’s massive demonstration on Sunday in Caracas. (Photo by Joanna Hausmann/Heavy.com)

With Hugo Chavez out of the picture, many believe this could be the opportune moment for change for the oil-rich country which has been suffering from a grave economic crisis. In fact, over the past few years Venezuela has coped with hyperinflation, one of the highest crime rates in the world, as well as a shortage of staple goods which has citizens waiting hours in line for simplicities such as sugar, toilet paper, flour and cooking oil.

The feeling on the crowded streets on Sunday during the demonstration was nothing short of ecstatic. The moment Henrique Carpriles took to the stand in front of millions to talk about change, reform and peace, the silence that had consumed the days following the death of Hugo Chavez reappeared for the few minutes Capriles spoke. Silence was peppered by roars of excitement that punctuated the end of the young candidate’s most inspiring sentences. 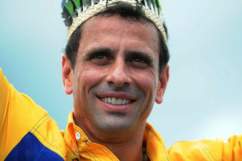 “The Venezuelan people are all tired of the violence, of the confrontation of the division,” the candidate said. “How dare the government use fear to pull people’s vote? … I am not the opposition, I am the solution.”

Isabel Sosa, a Capriles supporter and  participant of Sunday’s demonstration, told Heavy, “I feel great excitement. The more I walk the more young people I see. People are here because they want to be. Unlike the government who uses the state’s resources to bring people to their events, with buses and money, all these people you see, all of us, we came here because we want to be here.”

It is believed that this demonstration has inspired the voter that may have sat out during this next round of elections — inciting rumors that the opposition may win next Sunday. According to an anonymous source close to the opposition’s command, Capriles is “winning in the polls by 2 percent.” However, other anonymous sources that have come in contact with unpublished polls and reports say that Maduro is still many points ahead.

Pro-government supporters look to Nicolas Maduro to take hold of Chavez’s legacy and continue with his the deceased president’s “Bolivarian Revolution.” Maduro — who was named by Chavez as his formal successor before his death – has been attempting to use the memory of Hugo Chavez as his saving grace. In fact his campaign slogans are “Chavez Forever” and “Maduro is Chavez”. Gloria Martinez, a Chavez supporter since 1998 and a cashier at grocery store near the Carpiles’ demonstration on Sunday, told Heavy, “I don’t know what I feel about Maduro. I don’t really know much about him, but Chavez told me to vote for him before he died, so I’m going to do just that. I’ll do anything for my comandante [Hugo Chavez].” It seems as though Chavez has achieved the status of sainthood for some Venezuelans, and Maduro has been using it during this high-stakes political battle.

There is no question that Hugo Chavez was larger than life. With a reform to the constitution passed over a decade ago, the country was left with little checks and balances giving Chavez a remarkable amount of power. In fact, according to Professor Francisco Monaldi, expert in the oil industry in Latin America, “70 percent of oil revenues go straight to the government and are spent however it pleases.” Many believe it was Chavez’s unabashed charisma mixed with this overwhelming amount of power in both the political and the economic spheres that propelled Chavez’s ability to hold a tight grip of the presidency for over 14 years. Chavez supporters as well as the opposition wonder if Maduro is able to take on the role.

“He is trying to live in the shadow of Hugo Chavez. Maduro needs the memory and image Chavez to stand a fighting chance,” said Venezuelan journalist and political analyst Ana Julia Jatar in an interview with Heavy.

Tension is palpable in every corner of Venezuela. As you drive around the bullet-riddled streets of Caracas, pro-government and pro-opposition posters hang on every street lamp. The baker, the taxi driver, the politician, the doctor and the student are all consumed by the question, “What will happen this Sunday?” This isn’t just any election, this a revolutionary decision that will mark a historic change in the future of the country. 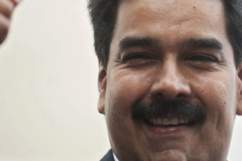 Loading more stories
wpDiscuz
0
0
Would love your thoughts, please comment.x
()
x
| Reply
Heavy.com reports directly from the tense streets of Caracas, Venezuela, on what is happening in the capital days before the presidential elections to replace Hugo Chavez.