Strong winds are responsible for fueling a 170-acre brush fire in Southern California as at least 84 families were forced to evacuate their homes in Fillmore on Monday night, reports NBC Los Angeles.

The fire broke out along a hillside at a mobile home near 1280 Goodenough Road just around 4:30 p.m. Thousands lost power after the 30 mph winds fed the fire and knocked down power lines. Two homes were already confirmed destroyed.

Residents could see the billowing smoke engulf the area as they fled to an evacuation center at the Fillmore Veterans Memorial Building.

“I can see flames and some smoke and helicopters coming in and dropping off their water,” Judi Ortiz said from about 1.5 miles away. “You couldn’t see anything at the beginning but smoke. It’s horrific.”

Additional crews were called for assistance and firefighters worked through the night in order to control the fire. Capt. Mike Lindbery said cooler overnight temperatures, higher humidity and calmer winds helped authorities calm the blaze and as of Tuesday morning, residents were allowed to return to their homes. 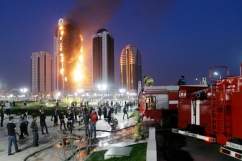