At least five climbers are dead and seven injured after one of the Philippines’ most active volcanoes erupted for the first time in three years, reports WRBL News 3.

Mayon volcano, about 212 miles southeast of Manila, spewed huge chunks of rock and ash just after daybreak on Tuesday. The climbers who died were struck by the falling rock and at least seven of a group of 20 mountaineers were injured as they became trapped near the crater. The dead included a German, an Austrian and a Filipino while the injured were foreigners and Filipino guides. Rescue teams and helicopters converged on the scene.

Guide Kenneth Jesalva told ABS-CBN TV by cellphone near the crater that huge rocks “as big as a living room” started raining down on them.

“The injured are all foreigners,” provincial governor Joey Salceda said. “They cannot walk. If you can imagine, the boulders there are as big as cars. Some of them slid and rolled down, we will rappel the rescue team, and we will rappel them up again.”

The head of the Philippine Institute of Volcanology and Seismology, Renato Solidum, said the activity is normal for the 8,070-foot volcano as it has erupted 40 times in the past 400 years. In 2010, Mayon, known for its picturesque cone top, spewed ash in a five mile radius and thousands of residents were forced to temporarily relocate to shelters. No evacuations were made during the most recent eruption.

It is reported that clouds have already cleared over the volcano later in the morning. 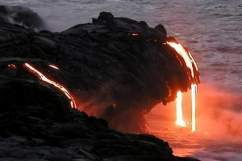 Loading more stories
wpDiscuz
0
0
Would love your thoughts, please comment.x
()
x
| Reply
At least five climbers are dead and seven injured after one of the Philippines' most active volcanoes erupted for the first time in three years