Numerous sites around Moore, Oklahoma are confirmed to have suffered EF-5 levels of damage, on the Enhanced (E) Fujita (F) scale. This means that the tornado that ripped through the city on May 20 was the most powerful tornado possible as its winds surged passed the 200 mph mark. On the enhanced scale the tornado’s power is not solely based on wind speed but on the damage seen after the twister has dissipated.

. @nwsnorman finds damage at Briarwood Elementary: Rates EF-5. I was there this a.m. Take a look. #oktornado twitter.com/DanielleDozier…

Spokeswoman for the National Weather Service told the Associated Press that the storm had been upgraded from EF-4, as they had previously tweeted, based on what damage assessment teams found in Moore.

Since 1958, there have been 59 EF-5 level tornadoes (including yesterdays) that have struck in the U.S., seven have hit in Oklahoma, including two that landed in Moore, the last being a devastating storm in May 1999 that killed 55 people. 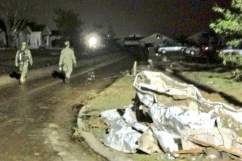 This was taken from a man’s home shortly before the tornado hit Moore Monday. Terrifying #okwx (Photo by Brett South) twitter.com/Tiffanyg89/sta…