A Navy SEAL is dead after a training accident this week at the Fort Knox Army post in Kentucky.

The incident, which took place at 9:30 p.m. Wednesday, May 15, left seven other SEALs with minor injuries.

ABC7 reports a Humvee carrying carrying eight people flipped over, killing the turret gunner, who has not been identified.

A turret gunner stands with his legs in the vehicle and his upper body protruding above the roof, as shown in this video:

In March, a Navy SEAL was killed in a training accident when he collided mid-air with a fellow SEAL during parachute training exercises over rugged desert terrain in Marana, Arizona. He was later identified as SEAL Team 6 member Brett Shadle.

Wednesday’s accident was the latest tragedy to plague Fort Knox, after one person was killed in a shooting there last month.

And back in February, another shooting — an apparent domestic dispute in a residence on the base — claimed two lives. 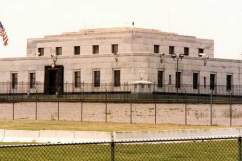