Thousands of people were in danger in the Oklahoma City metropolitan area Friday night as a tornado system threatened the heavily populated area and other areas of Oklahoma that just recently got hit with devastating storms. It’s being reported that three tornadoes touched down and at least nine people have now been killed.

To see the live coverage of the event as it unfolded go here: 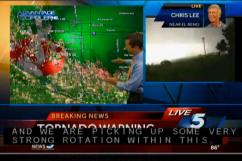 Times may change, but I would not want to be driving anywhere in the OKC metro after 4pm today. Tornadoes not certain, but be ready! #okwx

The declaration meant a large, destructive tornado was moving into a densely populated area where widespread damage and fatalities could have occurred. Around 9:30 p.m. EST, the National Weather Service announced that the tornado threat started to weaken in Oklahoma, but moved to a separate tornado system in St. Louis, Missouri. By 10:30, the tornado warnings were lifted.

2. There Were Multiple Tornadoes

3. A Tornado Touched Down in El Reno

4. Moore Was Also in Danger

A tornado warning was also issued for Moore, Oklahoma, where just last week a massive tornado flattened everything in its path and was responsible for 24 deaths.

5. There Are At Least Five Confirmed Fatalities Reported

Authorities reported that at least five people have died as a result of the severe storm system. A mother and her baby were among the dead after they were found by a vehicle after one of the tornadoes hit I-40.

6. Interstate 40 in Oklahoma City Was Shut Down

Oklahoma Highway Patrol urging motorists to get off I-35 and I-40 near OKC. on.cnn.com/11h2iw2

I-40 east of Oklahoma City was shut down and there were at least six reports of semi-trucks overturned.

10. Passengers at Will Rogers Airport Have Been Evacuated to an Underground Tunnel

There are about 1,200 people sheltering under Will Rogers World Airport, says @janetshamlian on.msnbc.com/139hrPO