Senator Robert Menendez – chairman of the influential  Senate Foreign Relations Committee – has introduced a bill that will provide weapons to some “vetted” groups of Syrian Rebels, reports Reuters.

This might be the first step in further U.S involvement in Syria. Menendez, a democrat, is one of the few senators that is actively working towards providing lethal aid to rebel groups that are currently fighting against President al-Assad’s regime. The war-torn country is suffering from a grave humanitarian crisis as a bloody civil-war continues to brew – racking total deaths at at least 70,000, with casualties rising by the hundreds every day.

The Obama administration had previously opposed directly arming Syrian opposition fighters, in part out of fear that the weapons could fall into the hands of Islamic extremists. However, with new doubt surrounding the use of chemical weapons in Syria by al-Assad, the U.S has threatened to intervene. 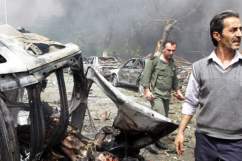 Menendez’ bill would have to get through a committee and approved by both the Senate and  House of Representatives before it is presented to President Barack.

Read More
Assad, Breaking News, Syria
This might be the first step in further U.S involvement in Syria.