Two days after DOMA got repealed and Prop 8 was ruled as unconstitutional, the U.S. 9th Circuit Court of Appeals officially reinstated gay marriage in California for the first time since 2008, reports the Los Angeles Times.

A spokesman for the U.S. 9th Circuit Court of Appeals originally said it would take the court at least 25 days for the measure to go back into effect, but Gov. Jerry Brown immediately began advising counties to “begin issuing marriage licenses to same-sex couples in California as soon as the 9th Circuit confirms the stay is lifted.”

“I am thrilled that the 9th Circuit Court of Appeals lifted its stay to allow same-sex couples to legally marry in California,” said California Attorney General Kamala Harris, who was already at San Francisco’s city hall marrying couples. “Gay and lesbian couples have waited so long for this day and for their fundamental right to marry. Finally, their loving relationships are as legitimate and legal as any other.”

The Supreme Court ruled 5-4 on Wednesday that married same-sex couples are entitled to federal benefits, knocking down DOMA, while declaring the original ruling on Prop 8 unconstitutional. 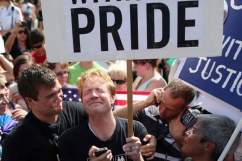 Loading more stories
wpDiscuz
0
0
Would love your thoughts, please comment.x
()
x
| Reply
Two days after DOMA got repealed and Prop 8 was ruled as unconstitutional, California reinstated gay marriage for the first time since 2008