The Miami Heat brought the fire on Thursday night and took home the championship title for the 2013 NBA finals against the San Antonio Spurs. The final score was 95-88.

Fans in the stands and on Twitter alike were going wild all night as the two teams ferociously duked it out on the court, not letting the other stay ahead for too long. Some people even called it the best Finals they’ve seen in a while.

Best NBA Finals I've seen in awhile, the love for the game is REAL, now I can't wait till the start of next season. Free Agency gon be REAL!

LeBron James took home the trophy for the Most Valuable Player, which was no surprise. LeBron, now a two-time NBA champion and a two-time Finals MVP, scored 37 points and pulled down 12 rebounds. With just a few seconds of the game left, the MVP sunk a three-pointer and sealed the win. 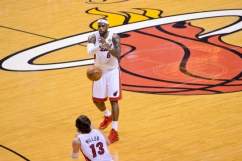