Former NBA point guard Mookie Blaylock was in court Tuesday afternoon, facing charges that stem from multiple DUI arrests and the accident that left him on life support 11 days ago.

Mookie Blaylock will make his 1st court appearance today. He also has an active warrant in an unrelated DUI case. twitter.com/GAFollowers/st…

Per NBC Atlanta, it was revealed at Blaylock’s hearing that the former Atlanta Hawk has six DUIs on his record. He was driving without a license on the day of his accident, the result of a DUI-induced suspension from last fall.

Blaylock’s accident came after he drove his Cadillac Escalade haphazardly across the median – an improper lane change – and head-on into another vehicle. A 43-year-old woman in the other car was killed in the collision.

Though Blaylock’s attorney, Don Samuel, maintains his client was sober at the time of his accident, CBS Sports tells us that he has been charged with vehicular homicide and is currently being held in jail. He surrendered to authorities on Monday and is being held without bond. 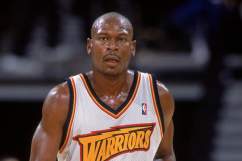 Blaylock was in pitiful shape at his hearing – as one might suspect 11 days after a life-threatening crash – sitting in a wheelchair and sporting a white gauze bandage on his forehead. The 6-time All-NBA defender looked a far cry from his glory years, nothing left to defend but his innocence, his reputation and his substance abuse-laden history.

Blaylock made one All-Star team during his 13-year tenure and twice led the NBA in steals. He was perhaps better known as a cultural icon, though, his lovable moniker, “Mookie,” and tenacious defense making him an instant fan-favorite. According to Pearl Jam bassist Jeff Ament, before the band settled on their eventual name, they went by another two-word title: Mookie Blaylock.

Per USA Today, Blaylock was wanted elsewhere at the time of his accident for skipping out on a DUI hearing.

Between that and the severe charges against him, Mookie could soon find himself behind bars, among a host of other men who made their fortune by stealing, for quite some time.

Loading more stories
wpDiscuz
0
0
Would love your thoughts, please comment.x
()
x
| Reply
Eleven days ago, Mookie Blaylock was on life support. Today he was in front of a judge.