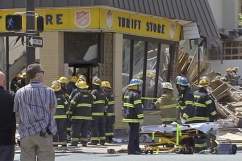 Often called the “enemy” of Former NYC Mayor Rudy Giuliani, Basciano was responsible for most of New York and Philadelphia’s X-rated entertainment, and therefore some of their grossest neighborhoods. 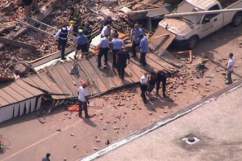 In Philadelphia, Basciano owned one of the last X-rated movie houses in the city, the infamous “Forum Theater” located at 2208 Market Street. When the theater closed in late 2012, Philadelphia looked forward to a revitalization of the neighborhood, which, like Porn-Crazy Times Square in the 1970s and 80s, had become an unsightly area.

Recently, Basciano has become the champion of revitalizing the area buying up as many buildings as he could around the Forum theater on the 2100 and 2200 blocks of Market Street, including the building that collapsed earlier today.

According to Philly.com Basciano’s lawyer said:

His lawyer, Frank Cresci, says Basciano plans to demolish the buildings he owns in the 2100 and 2200 blocks in January and use them as parking lots pending redevelopment.

These development plains explain why the building that collapsed was being prepped for demolition. According to Philly.com, there is already a Trader Joes further down the block.

Here are some of the recent headlines written about Basciano and his real estate plans:


and from New York Daily News: 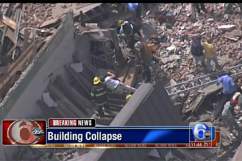