The situation intensifies in Turkey as massive anti-government protests continue to violently shake the nation. Tuesday’s battle in Taksim Square between demonstrators and police further punctuated tensions. Footage of tear-gas fogged air and photos of bloodied protestors support the opposition’s claims that police brutality has been rampant in the Prime Minister Recep Tayyip Erdogan‘s crackdown against peaceful protests. Three people have already been killed and thousands wounded in confrontations.  The graphic videos posted below were uploaded by protestors and give an unfiltered, first-hand account of the chaos on the ground: 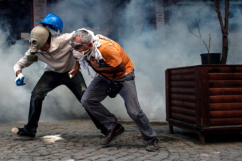