On January 4, a plane carrying Italian fashion executive Vittorio Missoni along with his wife and four others suddenly disappeared in Venezuela after taking off from a beach resort in Los Roques. Hundreds of people in boats, planes and helicopters searched the area for days finding no wreckage or debris of any kind. Now Venezuelan officials have confirmed via Twitter that they have found a small jet along a rough stretch of unpopulated coast on the north side of Curacao and that the wreckage is believed to be that of the plane which was transporting the Italian fashion scion. In the past few weeks, bags belonging to Missoni were found on the same north coast of Curacao as well as the neighboring island of Bonaire.

The 58-year-old head of the Missoni fashion house had traveled to Venezuela with his wife Marizia Castiglioni and their two Italian friends to take a break from their New York life. 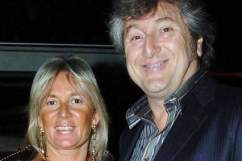 Less than a week ago, while searching for wreckage a ship discovered another aircraft that went missing in 2008. Venezuela’s beach paradise of Los Roques has been attached to a series of mysterious plane crashes and “vanishings” over the past decade, inevitably drawing the comparison to the infamous Bermuda triangle. Since the mid-90s there have been at least 15 reported incidence in which small aircrafts have either crashed or disappeared.