Mohammed Morsi is no longer Egypt’s president. Army Chief, Abdel Fattah el-Sissi has officially announced the ouster of Egypt’s embattled yet democratically elected leader, replacing him with the country’s chief justice of the Supreme Constitutional Court. Acting as Egypt’s interim president until presidential election is Adly Mansour. Here is what you need to know about Egypt’s new temporary leader.

1. He Will Rule On Pending Changes to the Constituion

2. He Was Appointed Chief Justice By Morsi Just a Few Days Ago

3. He is Egypt’s 6th President

Egypt’s democracy is young. The transcontinental country was under the rule of Hosni Mubarak from 1981 until the revolution that led to his downfall in 2011. Mubarak was appointed president following the assassination of President Anwar Sadat. Morsi was the first democratically elected president and assumed office in 30 June 2012. 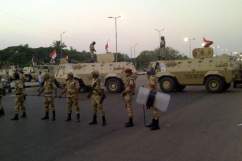 
Very little is known about Egypt’s new leader. In fact, his Wikipedia page was launched after he was declared president. Comical updates to the page say he has “ten inch genitalia” and is Batman.


5. He is In Power Until Elections Are Held

Election are expected to be held within the next few weeks although the exact date is unknown. In today’s press conference, the Army Chief did not mention the length of the transition period or when elections will be held.