Egypt’s army has issued an ultimatum to President Mohamed Morsi as the country teeters on the brink of total chaos. The armed forces have given Morsi till Wednesday to agree to share power with opposition leaders.

As millions of protestors and government supports take to the streets, the democratically elected Islamist leader looks increasingly isolated with ministers resigning and the liberal opposition refusing to talk to him. This ultimatum puts unparalleled pressure on Morsi and his political party, the Muslim Brotherhood. The images from the streets of Cairo are reminiscent to the revolution which engulfed the transcontinental country a mere two years ago when President Mubarak was ousted from power.

But President Morsi remains steadfast and has repeatedly said he will not quit. With democracy as his main weapon, the Egyptian leader has stated that street action cannot be allowed to remove an elected president or else the same could happen to future presidents. While millions of protesters seek oust Morsi, Islamist perceive the idea of him stepping down as an infringement on the repeated elections they won since Mubarak’s fall. These elections have given them a Muslim Brotherhood leader as well as a majority in parliament. 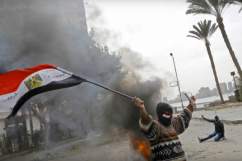 Will Egypt’s Protest Evolve into a Civil War?

Since then President Barack Obama urged Morsi to respond to protest demands but mentioned that “the United States is committed to the democratic process in Egypt and does not support and single party of group.”

The clock is ticking as doubts cloud Egypt’s political chaos. Will leaders reach an agreement or will violence and confrontation prevail?