Dr. Vincent DiMaio, a forensic pathologist and gunshot wound expert, makes a gun gesture while testifying for the defense in the George Zimmerman trial today. (Getty)

Expert testimony today by pathologist Dr. Vincent Di Maio concluded that Trayvon Martin’s gunshot wound indicates that he was “likely” on top of George Zimmerman at the time of the gunshot.

Dr. Di Maio is a multiple-times published expert on gunshot wounds. He said that the single bullet that killed Trayvon Martin passed through Martin’s clothing, which was 2-3 inches from his skin. The evidence indicated that Martin was leaning overtop of Zimmerman when he was shot.

“If you’re lying on your back, the clothing is going to be against your chest,” said Di Maio. “So the fact that we know the clothing was 2 to 4 inches away is consistent with someone leaning over the person doing the shooting.”

Under cross-examination by the prosecution, Dr. Di Maio admitted that the evidence leaves room for a second possibility — that Martin was pulling away from Zimmerman at the time of the shot.

Meanwhile, because the clothing was likely wet, it would be heavier and likely to hang off of the wearer’s body more than when dry. There was heavy rain the night of the confrontation.

Regardless of alternative possibilities, Di Maio testified that the evidence is consistent with Zimmerman’s account of the story.

“The wound itself, by the gap and the powder tattooing, in the face of contact with the clothing indicates that this is consistent with Mr. Zimmerman’s account that Mr. Martin was over him, leaning forward at the time he was shot.”

It’s important to note that Dr. Di Maio is a paid witness on behalf of George Zimmerman’s defense team. 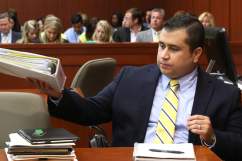