A train that was hauling 73 tankers of crude oil across the the US/Canadian border derailed around 1:00 a.m. last night causing a massive explosion in the small town of Lac Megantic in Quebec, about 155 miles east of Montreal, reports ABC News.

Mayor Colette Roy-Laroche tried to explain the scale of the devastation:

When you see the center of your town almost destroyed, you’ll understand that we’re asking ourselves how we are going to get through this event.

1. The Town of Lac Megantic Has Been Completely Evacuated

The fire caused by the explosion quickly spread from the area around the tracks and threatened nearby homes, including a retirement community. A full evacuation of the town’s 1000 population was ordered, reports CBC.

The train was reportedly destined for Maine and run by Montreal Maine & Atlantic which owns more than 500 miles of track serving Maine, Vermont, Quebec and New Brunswick.

Firefighters have been battling the blaze all night. It’s reported that several different fire departments from several counties are involved, including trucks from the US. 27 fire-fighting vehicles have been reported on scene.

It’s reported that train had no conductor on board.

The closer you get the more intense the smoke becomes. #cbcmtl pic.twitter.com/9mZi6OrnRf 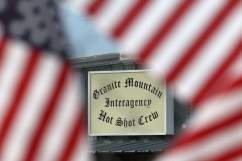 Though there are no reports of any injuries or deaths, Isabelle Aller, who was visiting the town told CBC:

It was total mayhem … people not finding their kids. The more time that passes, the more we are worried.

4. The Explosion May Cause an Environmental Disaster

It what could provide an environmental issue, crude oil has been seen falling into the Chaudiere River. The Associated Press have reported Environment Quebec spokesman Christian Blanchette saying:

We also have a spill on the lake and the river that is concerning us. We have advised the local municipalities downstream to be careful if they take their water from the Chaudiere River.

The town is also battling a “nauseating odor” which has overcome the town. Toxins in the air are a serious concern after fire and explosions like this. A mobile laboratory to determine the air quality has been established in the town.

Witnesses reported hearing between four and six separate explosions throughout the night. 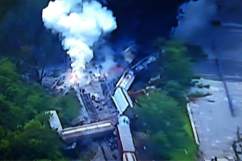 5. The Train Was Parked When the Explosions Occurred

The train’s conductor had parked the tankers and was waiting for his replacement, reports Reuters Canada.

We’re not sure what happened, but the engineer did everything by the book. He had parked the train and was waiting for his relief.

McGonigle added that, “somehow the train got released.”