Where will he go next?

After a week of speculation and rumors floating around the NSA whistleblower Edward Snowden’s final destination could be Iceland, Ecuador, Russia or Venezuela, this morning events tip the scale toward Venezuela.

This morning Russia’s president Vladimir Putin said in a statement that he will never return Edward Snowden to the United States, but added that he also could not stay in Russia if he continued leaking information that could be harmful to “our American partners.” This statement also comes in the wake of President Obama Admitting that the United States has engaged in high level administrative talks with the Russian government over the extradition of the 30-year-old NSA whistleblower. Snowden has been living in the terminal of the Moscow airport since he arrived there from Hong Kong over a week ago.

Putin says Russia will never hand over Edward Snowden to the U.S. #breaking

Putin says if Snowden wants to stay in Russia, he must "stop his work aimed at harming our American partners" #breaking

This announcement comes just as Venezuela’s President Nicolas Maduro is coincidentally in Moscow as part of a gas forum taking place July 1 and 2. Could President Maduro be planning on smuggling the passport-less Snowden out of the country with him? Venezuela has mentioned earlier that it would be willing to take Snowden in despite the warning the United States has given to the world.

The Los Angeles Times reported this morning that Snowden has made official asylum requests to 15 nations after Ecuador “disavowed his political protection credentials.” 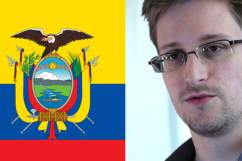 The Irony of Snowden Seeking Asylum in Anti-Free-Speech Ecuador

Loading more stories
wpDiscuz
0
0
Would love your thoughts, please comment.x
()
x
| Reply
Russia will not allow Snowden to stay unless he stops leaking information and Ecuador is out as well. With 15 Asylum requests sent, where will Snowden wind up?