Investigators discovered the driver of the Spanish train that crashed, killing 79 people, was on the phone when it derailed going nearly twice the speed limit last week, reports The Austrian. 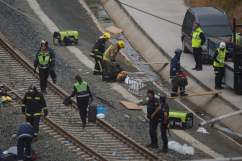 Francisco Jose Garzon Amo was driving the train at 195 miles per hour in a 50 mile per hour zone when it flew off the tracks and slammed into a wall after it rounded a sharp curve. The incident was Spain’s deadliest accident in decades, killing 79 passengers of the 218 on board. The driver, who escaped the horrific crash with jut a few injuries, reportedly told a judge that he had confused the part of the track the train was on with another part of the route. Garzon has been under fire since it was reported that he had previously bragged on Facebook about the speed he reached while driving trains.

An investigation into the crash just revealed that Garzon was on the phone with a co-worker and appeared to consult a map at the time of derailment.

“Seconds before the accident the brakes were activated. It is estimated that at the time of the derailment the train was travelling at 153kph,” said the Superior Court of Justice of Galicia, which is leading the investigation. “Minutes before the train came off the tracks he received a call on his work phone to get indications on the route he had to take to get to Ferrol. From the content of the conversation and background noise, it seems that the driver consulted a map or paper document.”

Examining judge Luis Alaez charged Garzon with 79 counts of reckless homicide and released him under court supervision. He had worked with the rail company, Renfe, for 30 years, including 13 years as a driver. Renfe reported that Garzon drove past the spot where the derailment occurred 60 times before.

Loading more stories
wpDiscuz
1
0
Would love your thoughts, please comment.x
()
x
| Reply
Investigators discovered the driver of the Spanish train that crashed, killing 79 people, was on the phone when it derailed going nearly twice the speed limit last week.