Attorney General Eric Holder announced mandated changes to criminal justice proceedings over low level non-violent drug offenses involving offenders with no ties to gangs or large-scale drug organizations at the American Bar Association Annual Meeting this afternoon in San Francisco. The reform will get rid of the “draconian” mandatory minimum sentences for some drug-related crimes.

The reform will force judges to give a case-by-case sentencing for certain drug possession convictions. This significant change to drug-conviction policy is an effort to alleviate the bloated U.S. prison system.

“As the so-called “war on drugs” enters its fifth decade, we need to ask whether it, and the approaches that comprise it, have been truly effective – and build on the Administration’s efforts, led by the Office of National Drug Control Policy, to usher in a new approach.

While the entire U.S. population has increased by about a third since 1980, the federal prison population has grown at an astonishing rate – by almost 800 percent. It’s still growing – despite the fact that federal prisons are operating at nearly 40 percent above capacity. Even though this country comprises just 5 percent of the world’s population, we incarcerate almost a quarter of the world’s prisoners. More than 219,000 federal inmates are currently behind bars. Almost half of them are serving time for drug-related crimes, and many have substance use disorders,” said Holder

Holder’s spearheaded reform is the first step for substantial change in how America incarcerates and approaches convicted drug-related offenders.

“As a society, we pay much too high a price whenever our system fails to deliver outcomes that deter and punish crime, keep us safe, and ensure that those who have paid their debts have the chance to become productive citizens.”

This reform includes the disturbing disparity between sentences for crack and powder cocaine, which has been viewed as a race issue. The question of race in drug sentencing is a benchmark in Holder’s proposed efforts.

“One deeply troubling report, released in February, indicates that – in recent years – black male offenders have received sentences nearly 20 percent longer than those imposed on white males convicted of similar crimes. This isn’t just unacceptable – it is shameful. It’s unworthy of our great country, and our great legal tradition.”

In his speech, AG Holder also addressed the “school-to-prison pipeline” that has developed in areas where illegal activities outweigh legitimate opportunities with future careers. He also wants to combat those zero-tolerance policies that push minors into the hands of police custody instead of to the principles office, inciting that metaphorical pipeline at an early age. The existing policies, according to Holder, “transform too many educational institutions from doorways of opportunity into gateways to the criminal justice system.”

A minor school disciplinary offense should put a student in the principal’s office and not a police precinct. 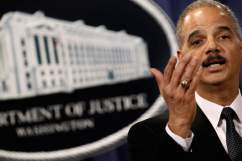 The U.S. Attorney General is also seeking a reform on how we as a society deal with sexual assault, domestic violence, and dating violence by “empowering” survivors by “closing research gaps and developing new ways to reach those who need our assistance the most.”

As studies show that six in ten American children are exposed to violence at some point in their lives – and nearly one in four college women experience some form of sexual assault by their senior year – we need fresh solutions for assisting victims and empowering survivors.

If you’re interesting in hearing his speech, you can view it in the video at the top of this article or read it it below: 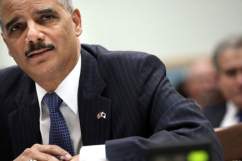