The 7.0 quake struck offshore about 67 miles southwest of Adak at 8:25 a.m. local time. There were no reports of damage or injuries, but it was strongly felt in Atka, an small community of 64 people, and the larger Aleutian town of Adak with a population of 320 residents.

“I heard it coming,” said Kathleen Nevzoroff, who was sitting at her computer in Adak when the earthquake struck. “I ran to my doors and opened them and my chimes were all ringing.”

At least 30 aftershocks occurred in the hours following the quake, with one reaching magnitude 6.1 at 10:39 p.m.

“We do expect aftershocks to occur in the next few days,” USGS geophysicist Jessica Turner said.

The Alaska Tsunami Information Centers said that there is no danger of a tsunami following the largest quake or its aftershocks. 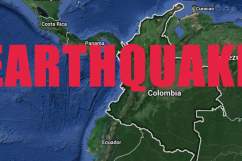