Christina Adkins disappeared in Jan. 11, 1995 at the age of 18. A tip shined new light on an investigation that went cold long ago. The renewed search for Adkins comes just months after Ariel Castro’s house of horrors was revealed to the world, bringing the city of Cleveland to a standstill.

Here are 5 fast facts you need to know about Christina Adkins.

1. The FBI Received A Tip About Her Body’s Possible Whereabouts

After news of Ariel Castro and his imprisonment of three Cleveland women spread across America, the FBI asked for the public’s help in a cold case involving the disappearance of Christina Adkins in 1995. She was 5 months pregnant when she went missing.

2. FBI & Police Are Currently Searching A Home In Cleveland

Authorities are now searching a home at 2610 Vega Avenue (above) in Cleveland, OH, which is on an access road off of I-9, according to WKCY. They are searching the entire house with a K-9 unit. They are also digging up the property.

The home is occupied, but the occupant is not a suspect.

Police and FBI are also searching a vacant lot next door.

It now looks like authorities did not find any human remains at the site.

FBI says no human remains found at Vega Ave. house where they were searching for body of Christina Adkins

3. Adkins Was Last Seen On West 25th In Cleveland

Adkins was last seen on January 10, 1995 on West 25th street in Cleveland, Ohio. She was on her way to the house of her boyfriend, who she lived with at the time. Family and authorities do not know what happened to her or where she is to this day.

4. There Was Speculation In 2009 That She Would Be Found In Mass Grave Site

In 2009, a authorities found the graves of 11 women outside a home on Cleveland’s east side. Word quickly spread, along with speculation that Adkins may be among the bodies. Unfortunately, the remains did not match the missing teen, leaving the family wondering about their loved one’s fate. 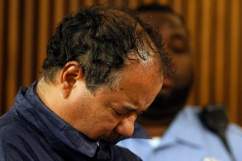 Read Ariel Castro’s Plea Deal: He Will Never Be Released ‘For Any Reason’ [DOCS]

5. There Is No Connection To Ariel Castro

When news of Ariel Castro’s crime went public, the Adkins family hoped that their missing loved one was rescued victims.

“I was overjoyed these girls were found,” said Adkins’ sister, Tonia. “And then it went to sheer excitement that my sister could be there too. It was very hard to hear she wasn’t.”

The proximity of Christina’s last known location is what caught the family’s attention.

“It’s only four streets away. That’s so very close. It’s hard to understand they were there that long,” Tonia said.