Three new documents released by the U.S. National Security Agency reveal that the agency’s controversial electronic surveillance programs have intercepted 56,000 e-mails and other communications by American citizens with no connection to terrorism annually over the last three years, according to AP.

The NSA revealed the error to a U.S. court today, as authorized by intelligence director James Clapper.

As reported by RT.com, when the NSA reported to a U.S. court about the program in 2011, they court found the surveillance practices unconstitutional and ordered the agency to find ways to limit the collection of communications of American citizens.

The declassified document shows that Judge John D. Bates found that the government had “advised the court that the volume and nature of the information it has been collecting is fundamentally different from what the court had been led to believe,”

CNN has reported that the NSA’s presentation to the court broadly misrepresented the scope of the program.

This comes after the August 9 press conference President Obama held with the media to address the NSA’s surveillance practices, in which he announced an order to the agency to make themselves and their practices more transparent. He also ordered a formal review of the programs. 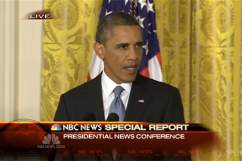 ‘I Don’t Think Mr. Snowden Was a Patriot’ — Says Obama in Speech to ‘Restore Public Trust’