The Toronto mother who received a shocking hate letter regarding her autistic son has responded with a letter about the importance of tolerance, reports the Daily Mail.

Karla Begley couldn’t believe it when she read a letter written by an anonymous person who complained about the “DREADFUL” noise her 13-year-old son Max made while he played outside and even suggested he be euthanized just because he has autism.

“He is a nuisance to everyone and will always be that way!!!!!” the author of the hate letter signed “One pissed off mother” writes. “Who the hell is going to care for him?????? No employer will hire him, no normal girl is going to marry/love him and you’re not going to live forever!! Personally, they should take whatever non body parts he possesses and donate it to science. What the hell else good is he to anyone!!!”

The letter quickly garnered publicity and droves of people came out in support of Max and his family. On Wednesday, Begley, who is wheelchair-bound with multiple sclerosis, wrote back to the anonymous person in a letter posted to a special needs blog called Love That Max.

“I will not stoop to an insulting level,” Begley wrote. “What I have to say is about tolerance, acceptance and respect for kids with special needs. Nobody should ever write a letter that hurtful. It describes Max as being “noise polluting” and “a nuisance.” Kids make noise. That’s what kids do. Nuisance is causing a public uproar about it!”

The 44-year-old goes on to say that the sounds her son makes is the only way he can express himself and that if they bother anyone she would prefer they let her know in a respectful way, rather than being cowardly about it.

“If Max’s sounds bother someone, I’d hope that person would let us know in a respectful way. Give us a chance to handle it instead of being cowardly about it. I’d rather people bring things out in the open. Sometimes, kids come up to me and ask “Why does he talk funny?” The parents are embarrassed. But if the mom isn’t going to talk properly to a child, or teach him that kids with autism are not contagious, I will!”

Begley also says that although Max cannot express himself like other children his age, he still understands and is a person just like everyone else who “has a zest for life—he loves to look around, listen to music, go snowmobiling and jet-skiing with his father.”

If the writer of the letter is ever identified, the Begley family plans to press charges. 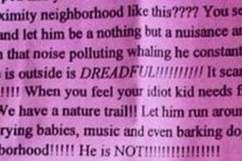 Loading more stories
wpDiscuz
0
0
Would love your thoughts, please comment.x
()
x
| Reply
The Toronto mother who received a shocking hate letter regarding her autistic son has responded with a letter about the importance of tolerance.