U.S. Maj. Nidal Hasan, the Army psychiatrist who is charged with murder in the Fort Hood shootings. ( Getty Images)

Nidal Hasan‘s court-appointed attorney accused his client of deliberately trying to receive the death penalty, suddenly stopping the trial after only one day. Hassan — the radicalized Army psychiatrist accused of killing 13 people and wounding 30 during the 2009 Fort Hood shooting spree — previously dismissed his defense team, choosing to represent himself. However, the court ordered a group of defense attorneys led by Lt. Col. Kris Poppe to act as “stand-by” counsel to help Hasan through the procedural steps of the trial.

courtroom sketch of Nasan as he gives his statement to the court.

It is “clear his goal is to remove impediments or obstacles to the death penalty and is working toward a death penalty,” Poppe said to the the judge overseeing the case at the Texas military base. Poppe also stated that he felt Hassan was acting in a way “repugnant to defense council and contrary to our professional obligations.” Hassan responded with, “I object that’s the twist of facts.” The judge then proceeded to clear the room and recess for the day.

On Tuesday, Nidal Hasan gave a calm yet simultaneously jolting statement in which he did not only admit to the murders, but he justified his actions as the will of God.

Hasan, a Virginia-native son of Palestinian immigrants faces 13 charges of premeditated mudered and 32 of attempted premeditated murder which are related to the 30 individuals he injured during his attack. Military prosecutor Colonel Steve Henricks said Hasan had planned to “kill as many soldiers as he could.” The bearded defendant is now in a wheel chair after being shot and paralyzed during his attack. 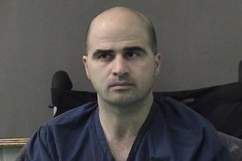