The tragedy that is the Syrian civil war continues today as video emerges of the aftermath of an incendiary bomb attack on a civilian school playground.

Eyewitness accounts describe a Syrian army aircraft circling the area before dropping a device. Witnesses reported “a low explosion followed by columns of fire and smoke.”

At least ten people were killed and many more were injured, including children. The above footage shows children and adults with severe burns and burnt clothing.

You can watch a BBC report of the attack above. The footage may be distressing.

The headmaster of the school spoke to Guardian reporters:

“This was the most horrific thing. We have seen images on TV, we have heard many stories, but we have never seen anything like this before. The worst thing in life is watching someone die right in front of you and you can’t do anything.

There were dead people, people burning and people running away, but where to? Where would they go? It is not safe anywhere. That is the fate of the Syrian people.”

A British medic named Dr. Rola, who works for the Hand In Hand medical aid charity, treated some of the victims. She also spoke to reporters about the situation.

It is just absolute chaos and carnage here. We have had a massive influx of what looks like serious burns, seems like it must be some sort of, not really sure, maybe napalm, something similar to that. But obviously within the chaos of the situation it is very difficult to know exactly what is going on.

Although an incendiary attack is not considered a chemical weapons, it was banned for use against a civilian population by the United Nations Convention on Certain Conventional Weapons in 1980. Unfortunately, Syria was not one of the countries to sign that ban. 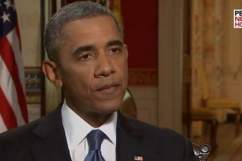 Loading more stories
wpDiscuz
0
0
Would love your thoughts, please comment.x
()
x
| Reply
The tragedy that is the Syrian civil war continues today as video emerges of the aftermath of an incendiary bomb attack on a civilian school playground.