Flights have resumed at Washington’s Reagan National Airport after a prolonged delay due to the horrific scenes that unfolded at the Washington Navy Yard, reports USA Today.

Entire plane getting updates from Twitter on why we’re trapped on the #dca tarmac: Navy yard shooting.

Around 30 planes were stranded on the tarmac while passengers waited patiently for news.

Proof that DCA is closed due to #NavyYardShooting. View from tarmac. Trying to get back to #clt pic.twitter.com/hRCWe2j3dQ

From my view on the DCA Tarmac: ground stop for all planes, helos in the soggy air over Navy Yard. pic.twitter.com/J3hDdjRIl1

Reports coming from the Navy Yard as saying several people have been killed, a shooter is dead but two more remain at large and appear to have escaped the scene. 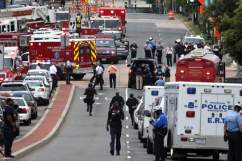 Coincidentally, according to Reagan National’s official website, the airport is due to undergo an emergency training drill on the morning of September 21. It’s described as: “Full-Scale Emergency Exercise at Reagan National Saturday, Sept. 21.”