A man claiming to Lamar Odom’s drug dealer has given a tell-all interview to Radar Online in which he speaks candidly about the former LA Lakers star’s downfall. The mystery man, who spoke to the news site on the basis of anonymity, provided “photographic evidence” to demonstrate his ties to Odom. During the interview the dealer says:

He likes to party. He’s a pretty nice guy to be honest with you, but he’s becoming … his problem seems to be becoming a bigger problem. In my experience, he literally likes cocaine — he is a cocaine guy. He likes to smoke it.

Last week, Odom caused worry amongst his friends and family last week when it was claimed he was missing. Eventually he was found holed up in a Los Angeles hotel. It’s now being reported by the gossip-media that Odom’s marriage to reality star Khloe Kardashian is on the rocks, or worse. 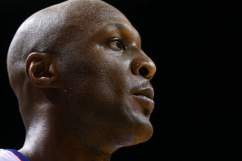 While Odom’s disappearing act was being reported, stories of his drug use and possible addiction came out. His dealer elaborated on occasions when he saw the NBA power forward high:

Specifically, I want to say [it was] February of 2013. He was in New York. For other reasons, I don’t really want to give the specific location of the place … sounds weird that I want to keep a level of discretion at this point, but, he was in New York. He comes to New York a lot.

Over the course of his three-year relationship with Odom, the dealer claims the power-forward spent around $50,000 on cocaine. During that particular drug binge, Odom shelled out $16,000 on coke:

Quantity wise, it was a little under half a kilo. But it’s not coming in a form that I would give it to another dealer, it’s coming more broken down so it’s like, okay, I want to spend 3 or 4 grand and I’ll call you back, hey I got another four grand for you, hey I have five, it’s more like that.

The interview suggests that while the Kardashians tour the world flanked by entourages and hangers-on, Odom travels with his dealer. It concludes with the narcotics-man imploring to Odom:

Dude, you are a drug addict. This is becoming to the point where you could lose your life.