Today RT is reporting that Syria has made the announcement over a state-run news channel: Syria is handing over its chemical weapons.

In an interview with Rossiya-24, the contested President Assad said, “Syria is handing over its chemical weapons under international supervision because of Russia. The US did not influence the decision.”

The decision on the part of the Syrian government comes just as Russian President Vladimir Putin reached out to both Syria and the United States in order to sooth tensions and the possibility of a possible U.S. military strike.

Putin has been working with Assad throughout the conflict and on September 11, published an op-ed in the New York Times encouraging the United States to be less antagonistic and to consider all peaceful diplomatic options before considering a military strike against Syria.

Former President Jimmy Carter meanwhile, has published a column in the Washington Post encouraging President Obama and the United Nations to take advantage of the recent momentum by holding a peace conference between Russia and the United States, call a cease-fire enforced by U.N peacekeepers, and a willingness among politicians to do an unpopular thing to retain international stability. 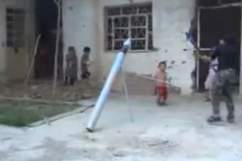 Loading more stories
wpDiscuz
0
0
Would love your thoughts, please comment.x
()
x
| Reply
President Assad announced on Syrian TV that the war-torn nation will hand over all chemical weapons to the international community.