James Lone has been named as the U.S. citizen who was found dead in a jail cell in Ismailiya, Egypt, over the weekend, reports Ahram Online.

1. Lone Died of an Apparent Suicide by Hanging

Lone reportedly committed suicide in his jail cell in Ismailiya Awal police station (above). He was reportedly found hanged by his shoelaces and a black belt, the U.S. embassy in Cairo have referred to it as a suicide.

James Henry, James Lunn, and now James Lone. We really need to work out what this American is actually called http://t.co/sje3jy3GGy

The American man found hanging in a jail cell at the Ismailiya Awal police station (above) was incorrectly identified as being ex-military officer James Henry, reports Ahram Online.

The U.S. embassy in Cairo is saying that the man’s identity is actually James Lone, also a U.S. citizen. He was found hanging off a bathroom door in his jail cell.

James Henry was arrested by Egyptian police on August 28 in North Sinai, where he was making his way to the Gaza Strip. He was charged with breaking curfew and remains in custody, reports the BBC. 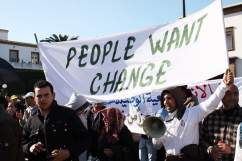 3. Lone is the Second Foreign National to be Found Dead in Egypt in a Month

In September, a French national was found dead in a jail cell in Egypt, reports the BBC. It’s reported that he was beaten to death by a group of prisoners.

4. A British Man Was Arrested in the Same Area as James Henry on October 12

James Henry, the man originally identified as the deceased U.S. citizen, was arrested around the area of North Sinai. On October 12, another man, a 44-year-old British national, was picked up by police and was found to be carrying different uniforms, similar to those used by the security forces in Egypt. He was also found to have two cell phones, a laptop and 5,000 British pounds on him.

5. The US Embassy Is Not Releasing Info on James Lone

Nor is there any mention of Lone on the U.S. embassy website in Cairo.

Read More
5 Fast Facts, Breaking News, Egypt
James Lone has been named as the U.S. citizen who was found dead in an Egyptian jail cell over the weekend.