On October 4, police investigate the scene after a man set himself on fire at the National Mall in Washington, D.C. The man, who later died, has been identified. (Getty)

The man who doused himself in gasoline and set himself on fire last week at the National Mall, later dying of his injuries, has been identified as a mentally ill New Jersey resident.

The Washington Post reports that John Constantino, 64, from Mount Laurel, “acted not out of political motives but as the result of ‘a long battle with mental illness,'” according to a statement from his family. 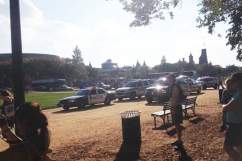 Man Sets Himself on Fire at the National Mall: 5 Fast Facts You Need to Know

Loading more stories
wpDiscuz
0
0
Would love your thoughts, please comment.x
()
x
| Reply
The 64-year-old from Mount Laurel, New Jersey, reportedly did not have political motivations when he doused himself with gasoline and lit a lighter.