1. This Will be the Second Knee Injury She’s Suffered in 9 Months

It’s not known which knee Vonn injured. In February 2013, at the World Championships, she blew out her right knee, injuring her ACL and MCL. 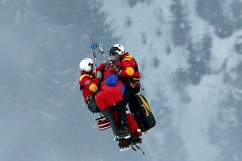 2. She Will Undergo an MRI

After being helped of the slope on a sled, Vonn is going to hospital for an MRI on the new injury.

3. One Image Was Taken at the Scene

A Twitter picture from the scene shows Vonn being helped off the hill:

@SkiRacingMag Lindsey Vonn after her crash this morning at Copper pic.twitter.com/AGedtVQmR4

4. Vonn’s Comeback is Scheduled for December

Vonn had been expected to make her comeback at the World Cup competition in Beaver Creek, Colorado on Thanksgiving weekend, reports NBC News. She has spent most of 2013 rehabbing her right knee. The Sochi Winter Olympics are in February 2014.

The U.S. Ski Team have confirmed her injury and that she checked out of training. Team spokesman, Tom Kelly, told The Associated Press: “We have no reason to believe it’s anything significant right now.”

Vonn pictured with Tiger Woods at the Chiefs/Broncos game on November 17. (Getty)