Missing divers, father and son, found dead on Christmas DayOfficials with the Florida Fish & Wildlife Commission said they recovered the bodies Christmas Day of a father and son who went missing after cave diving in the Chassahowitzka Wildlife Refuge near Weeki Wachee.2013-12-26T17:20:04.000Z

On Christmas day, Darren Spivey, 35, and his 15-year-old son Dillon Sanchez died during a father-son Christmas morning dive using equipment they received for Christmas. The two were last seen around 11am as they prepared for their dive.

Here is what you need to know about this underwater accident:

1. They Were Diving at the Eagle’s Nest

Cave Diving Eagle's NestPlease contact me if you wish to use my footage Becky@LiquidProductions.com This was shot in 2005 I have more recent footage. Eagle's Nest is a deep cave in FL just north of Tampa. It used to be considered the Mt. Everest of Cave dives to many technical divers. Its remote, over 300ft deep in areas…2007-05-06T14:34:07.000Z

The Eagle’s Nest sink is in the Chassahowitzka Wildlife Management Area in Hernando County, Florida, just north of Tampa.

According to CaveAtlas, the Eagle’s Nest is around 310 feet deep and is considered a “very advanced dive.”

You can watch a video of someone doing the Eagle’s Nest Dive above.

2. Spivey Was an Experienced Diver, Sanchez Was Not

The National Association for Cave Diving recommends that those planning to dive in the Eagle’s Nest have a minimum of “full cave certification”, “Trimix certification”, and the “appropriate experience with deep cave dives.”

3. Authorities Were Called When They Did Not Return Home

Four hours after their 11 a.m. dive, at around 3 p.m., Spivey’s fiancee Holly King called the authorities. Spivey’s car was still parked by the sink site and by 8:30 p.m. Christmas night, divers were sent into the cave to look for them.

4. Their Bodies Were Recovered at Very Different Depths

A study conducted by the Cave Divers Association of Australia found that world wide, 368 people died in cave diving accidents worldwide between 1969 and 2007.

According to the study, 329 of those accidents occurred in caves in the Unites States, 111 of those fatalities occurred in Florida. 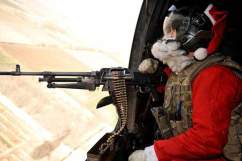 A Soldier’s Christmas: 20 Holiday Pictures of US Troops Celebrating Overseas