Early this morning the Massachusetts State Police uncovered 1,250 bags of heroin during a traffic stop. The bags were labeled “Obama Care” and “Kurt Cobain.”

On their Facebook page, the Massachusetts State Police wrote that during the stop:

… evidence of illegal narcotics led to a request for a State Police K9. Trooper David Stucenski and K9 Frankie located 1,250 individual bags of heroin in the vehicle. Four people were taken into custody and charged with narcotics violations. 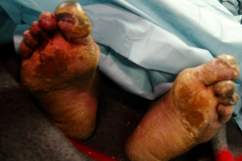 EXCLUSIVE INFOGRAPHIC: What is Krokodil the Flesh-Eating Drug?